In this episode of the Good Tidings podcast, host Larry Harper, founder of the Good Tidings Foundation, brings the debut season of the podcast to a close by interviewing his friend and Rock & Roll Hall of Famer, Alice Cooper.  Listeners will likely recognize Alice as an American music icon, but throughout the conversation, they will see that he is also a compassionate giver. 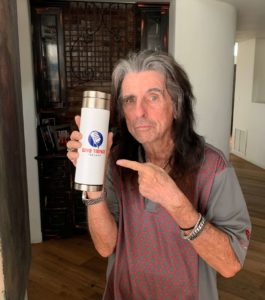 As the interview begins, Larry runs through his history with Alice Cooper, ultimately detailing Alice’s kindness, which Alice grounds in a sense of privilege.  His was the weird “band that shouldn’t have been,” he explains.  Continuing to discuss his early years, Alice tells Larry about his upbringing in a Christian family, his decision to ignore God while pursuing other things, his foray into alcoholism and drug use, and how he believes God liberated him from alcoholism.  Further, he speaks of interests in baseball, cross country, visual art, and music.  Eventually, he and several others started a band, The Spiders, later called Alice Cooper (which only later became his own legal name).  The band captivated crowds with theatrics, a bad-boy/”gentleman villain” image, and a combination of comedy and horror.  Alice comments on their big break, celebrity fans, pushing limits, and navigating religious pulls in his life.

Moving forward, Alice and Larry talk the Hollywood Vampires, Jesus Christ Superstar, how Alice met his wife, and his new album, Detroit Stories.  Larry then turns the tide of the conversation back toward Alice’s practice and history of giving.  Alice believes that he has a God-given gift of compassion that drives him to help people, and he explains how he founded the Solid Rock Foundation in order to give back to the teenage community that – by embracing him and his music – gave him his fame.  Alice aims to meet needs and supply the deserving in a unique way – by providing avenues for teens to explore music and the arts.  While it was initially challenging to find a space to establish the organization, the project has grown significantly as Alice and his team have demonstrated care for and belief in teens from all different backgrounds.  Alice speaks to his Christian spirituality, his sense of a call to serve, and the ways in which his work is both relevant – even to people who do not share his faith – and worthwhile.

Don’t forget to subscribe to the Good Tidings podcast on Apple Podcasts, Google Podcasts, Spotify, or wherever you get your podcasts!